The Pedersoli, a dog called Bullet and the Pheasant -
by Christiaan Kruger


The air was fresh when we got out of the Nissan bakkie (pick-up truck) to lower the flap so that the German Shorthair Pointer by the name of Bullet could jump off the back of the bakkie. There were three GSP’s on the back of the bakkie. They are trained not to jump off unless commanded to. We have just seen a few Swainsons pheasants next to the dirt road. I was loading my Pedersoli 20Ga muzzleloading shotgun. I threw in the charge directly from the spout of the Hawksley powder flask into both barrels. Then I put five thin white cardboard wads on top of the powder and rammed the wads down. I got the hard leather shot flask out and the no 6 lead pellets cirrrrred out of the brass measuring spout and down the barrel, when I pressed the spring loaded cut-off of the shot flask. It was the first time I’m walking into the field since I lost the hearing in my left ear. Every sound suddenly becomes something special because some sounds are simply not there anymore. With the lost of hearing I also noticed that my sense of smell intensified. It was like my nose was trying to compensate for my loss of hearing. The morning smelled good … very good. After the good rains on the Highveld the earth was wet and the morning had that fresh wet-earth smell mingled with the wet autumn grass smell. It smelled so fresh you can almost taste it. Like the freshness went from my nose directly to my palette. I rammed two thin cardboard wads down on top of the shot and capped the nipples. The Pedersoli was loaded and I was ready. Bullet, the dog, was shivering with excitement to be given the “search” command.

Bullet is Big Francois’s two year old white GSP bitch. Francois trained and bred many dogs since his childhood. This one is a true top working dog that only wants to hunt for birds. Francois pointed that big arm towards the centre of the field and gave the command “Bullet … search!!” You should have seen her. She went from sitting at zero to full speed in one explosion. We started walking slowly into the wet grass as Bullet radar scanned the field. The grass smelled even better while it crushed under my water boots.

Francois kept his eye on Bullet while he was speaking to me. “The Pheasants like this short grass cover and rocky terrain. They hide among the rocks and like to skedaddle to the Mielie (corn) fields on our right when disturbed”. He pointed towards the higher ground on our left and continued. “The Orange River’s like that higher ground. I have found about four covey’s over there.” We don’t shoot the Orange River Pheasants. I just like to visit them with the dog. Orange River’s are royal game here on the Highveld. We need a special permit to hunt them. They are very precious to me and I don’t like to disturb them too much. We will work our way into that direction because some Swainson pheasants might run towards that higher ground and hide in the longer grass.

Bullet was covering ground at a frantic pace. Turning, returning, running with graceful rhythmic fast strides, then slower with the nose dipping to the ground and then at full speed with the nose in the air again. Oh, have you ever seen a pure bred GSP in top form in action on a fresh autumn morning. It is inspiring beauty. The commitment makes your heart pump faster. The graceful strides are like watching a professionally trained dancer performing her beautiful art with perfection. Yes, it’s a beautiful sight to see and experience. I have walked behind other GSP’s before and it wasn’t the same. I have been on organised bird shoots where rich and busy Gauteng wingshooters shout the whole time at misbehaving GSP’s. Dogs they bought from a Landbou weekblad classified ad, but didn’t train or discipline properly so their GSP’s ignore all commands and just do what they want. Men shouting, dogs running wild, whistles blowing, dogs barking and owners cursing events. Those noisy events where the misbehaving dogs, the whistles and the cursing spoil the beauty of the day. No art there, unless you are one of those people that like to call chaos art like they do with paintings and sculpting these days. This morning I was watching a bird dog performing art against the beautiful canvas of an early Highveld morning of autumn grass and clear blue sky with just a few small white clouds hanging in the air … and it was pure magnificence, pure art and soul cleansing emotion.

I was carrying an Italian piece of art in my hands. It’s a 20ga Pedersoli that I asked Pierangelo Pedersoli to build for me. It has a beautiful piece of wood as a stock. Some scroll hand engraving by an Italian master engraver adorns the side plate of the locks and long slender browned barrels round of the piece of art. 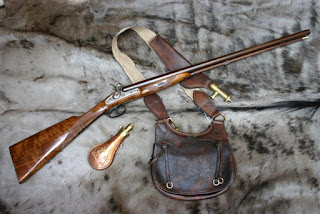 Suddenly a red headed brown bundle of fast flapping feathers lifted of the ground and clearly silhouetted itself against the blue sky. I threw the stock to my shoulder and cocked the right hammer in one motion but realized that it was a bit too far for my 20Ga muzzleloader. I just watched over the barrels as the flapping wings of the pheasant put distance between us, reach altitude and gracefully landed some 200 meters from us. Bullet came to a halt and just sat there looking with us at the pleasant sight. He looked back at his trainer and listened for the command. “Bullet …Search!” came the command as Francois pointed his arm in the opposite direction. I thought I saw a moment of “why that way?” but the dog turned on a ten cent and was doing its job with total commitment.

“That bird will run when it hits the ground and we need to let the smell spread over the ground. Bullet will get him if he is still there a little later.” Francois said. “You did good not to take the shot. We don’t shoot if the dog didn’t point the bird. It is all about training your dog. The dog must learn that if he doesn’t point the bird we don’t shoot. We are hunters that love our dogs, the birds and being out there in the field. It’s not about killing. We want to conserve this noble sport, act with responsibility like gentlemen and enjoy it for many years to come.” “Did you hear the Orange River’s” Francois said with his arm pointing at the hillside where he said there will be Orange Rivers. “No, I can’t hear them” I confessed. “There it is again” and surely, I heard something but I couldn’t tell where it came from and it was not very clear. I was still adapting to the sudden loss of my hearing in my left ear. A labirintitis virus in the coglia of my left ear won the battle and left me pretty deaf on the left side. “Lets walk slowly in that direction” Francois said. “I think there will be pheasants.” He blew once on the whistle and Bullet sat down and looked at his master. Francois pointed her towards the higher ground and said “Search”. Bullet obeyed and started scanning in the direction his master guided her. If people were just as committed and obedient to basic commands we sure would have a better world to live and work in. 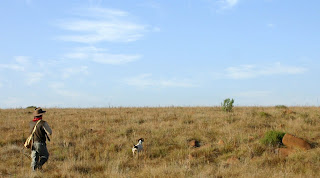 We crossed a fence and Bullet kept performing his art while we walked slowly through the Highveld short grass. Then as fast as Bullet was running he stopped, smelled on the ground making quick spot checks left-right .. left-right …left-right. She kept moving ahead with purposeful sniffs and suddenly became a statue. The Highveld suddenly became silent and stood still for a moment. Oh, what a sight …. Bullet was looking straight ahead. Her short tail was pointing at 45 degrees and her right paw drawn under her chest. A classic beautiful point.

“It’s a point. The birds are right there. Walk slowly up to her and be ready. That is a serious point.” Francois instructed. 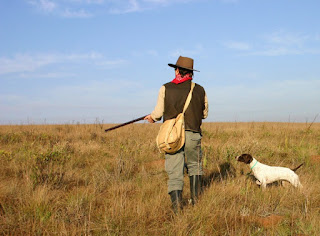 I walked forward and pulled both hammers to full cock. My heart was racing. It’s been a while since I have fired my shotgun and I was experiencing a little uncertainty in my shooting ability. It was early in the season and I didn’t start practice on the doves, like I usually do. Just don’t mess it up before this masterful dog, I told myself. I still wanted to do some motivational talk to myself when the quiet “empty grass” exploded with birds. I had a moment of uncertainly and then focussed on the bird to my left and everything happened in slow motion. I saw the aiming gap between the hammers, I saw the bird, I saw the white smoke and I saw the bird tumble. After the shot the air was still filling with red headed brown bundles of rocketing pheasants. I remember thinking that I have never shot a double and then turned to my right and moved my finger to the back trigger. I pulled the trigger but knew it was a miss because I was swinging from left to right and the bird was making left turn in the air. My mind was still trying to remember the perfect picture of the previous shot. The shot pattern went safely behind the bird and the pheasant was gloriously exiting the smoke cloud against the clear blue sky. It felt good and smelled absolutely fantastic. The wonderful smell of burned black powder hanging in the air mingled with the smell of wet earth and autumn grass. I was savouring the moment and appreciating the warmth of the sun shinning on me. I felt the warm feeling of a perfect point and a clean kill when I realised Bullet was sitting contently next to me and looking up at me with a satisfied smile on her face like she was saying “You did alright with that smoke pole of yours. Pity about the second shot but I would like to finish it off now.” 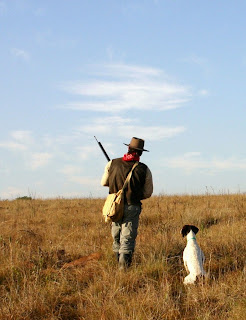 Francois brought me out of my pleasant-pheasant-trance by saying. “Point Bullet in the direction and tell her to fetch.” Not that Bullet needed direction. She marked the spot where the bird fell and knew exactly where to go. I held the shotgun in my left hand, bend over to Bullet and pointed her towards the bird and said “Bullet … fetch.” I saw her jump away, pick up the bird and bringing it to me with a satisfied excitement. 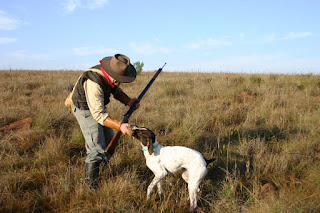 What a moment … it was my first pheasant of the season and my first muzzleloader shot over a superb GSP. I hope these very special birds will forever echo their clear calls on the Highveld grasslands.


If it is up to me, Francois and the farmers that kindly allow us to run our dogs and shoot a few pheasants out of a covey, they will be here for a long time.

A peace of heaven...